This site is about a previous instance of this event. For the current event, please see the updated site.

Venue Where the action is

Nordic PGDay 2014 will be held at the Hilton Stockholm hotel near Slussen in downtown Stockholm, a short metro ride from the central station. Lunch will be enjoyed in the panoramic restaurant overlooking the waters of Stockholm.

Visitors from out of town can of course stay at the hotel during the nights, to minimize travel times. The hotel is located in the heart of Stockholm right next to one of the main metro stations. See further down for more information on how to get to and from the venue.

Getting to and from the airport

Arriving at Arlanda Airport there are quite a few options for getting to Stockholm City. Arlanda is situated about 40km north of the city so allow 30-60 minutes for travel depending on mode of transport and traffic conditions.

The Arlanda Express train is the fastest and easiest way to get to Stockholm City Central. The journey takes 20 minutes and the train departs from two stations at the airport: Terminal 5 and Terminal 2,3,4. Return fare is 490 SEK with single trips costing 260 SEK. Tickets are bought in vending machines either inside the terminal or on the platform, if you buy your ticket on board the train there is a steep extra fee. Free WiFi and power ports are available during the journey.

Arlanda Express takes you to the Central Station.

Like every airport in the world there will be fleet of taxis outside the terminal ready for your every transport needs, and like nearly every airport in the world there are a few things to remember on this very subject to avoid exorbitant fees. Sticking to the three major companies and asking for a fixed fare (should be around 500-550 SEK from Arlanda to the Hilton) is the safe way we recommend. The taxi companies to use are (do note that there are taxis with very similar name and branding so check twice to make sure):

All cars within these companies accept credit cards (both chip&pin and swipe cards of major brands like MasterCard, Visa and American Express) and will always give you a machine printed receipt. Taxis in Sweden are legally required to display a price comparison sticker listing the highest fare per 10km. Any taxi with a higher price listed than 350 SEK can safely be ignored. If the sticker is missing then avoid the car altogether.

Arlanda is served by two coaches that run an almost direct service (just a few stops) to Stockholm City Bus Terminal, the journey takes around 35-45 minutes depending on traffic. Buses run on a very frequent schedule from right outside the terminals. Tickets can be prepurchased online or in vending machines inside the terminals. The coaches serving Arlanda are provided by Flygbussarna and cost 105 SEK one way. Free WiFi is generally available on-board.

The airport coaches take you to the Stockholm City Bus Terminal, which is across the street from the Central Station.

The Stockholm commuter trains are also serving the airport on the Uppsala-Älvsjö line. The journey stops at quite a few places and thus takes quite long, allow 45-50 minutes. If you plan to explore Stockholm on your visit it will most likely be economic to buy a multifare ticket which is valid on all commuter trains, metro and buses. A special addon ticket needs to be purchased for the airport station. Note: Tickets cannot be purchased on board any means of transport in Stockholm and a hefty fine can be the result of traveling without a valid ticket.

Once you have arrived at Stockholm Central Station, getting to the Nordic PGDay venue is a short metro or taxi ride away.

Just like with taxis at the airport, stick to the three big companies and avoid every other car. The taxi rank outside Arlanda Express is controlled and often have staff that can assist.

Using the metro is both convenient and safe in Stockholm at all times during the day. The entrance to the metro is located, as can be expected, in the basement of the central station. Follow the signage with a white T on blue background (most of the signs also says Metro but not all).

Follow the signs and when you reach the ticket gates, once validated your ticket is valid for any connection during 75 minutes from the time of validation. The metro system is color coded with regards to lines, these colors are however not reflected on the actual trains (you can ride a train painted green on the Red line even though there is a Green line). A full line map can be downloaded. Below is a photo of the metro gates, the different lines serviced from different platforms so follow the color coding to get on the right escalator. If in doubt, staff in blue vests can help you.

The venue for Nordic PGDay is located very close to the Slussen metro station only two stops from the central station. To get to Slussen, take the Red line towards Fruängen (T14) or Norsborg (T13) or the Green line towards Hagsätra (T19), Farsta Strand (T18) or Skarpnäck (T17). Note that some trains stop at an earlier station than the end station (such as T14 to Liljeholmen), but all the above lines serve the Slussen station.

Tickets are valid for all forms of public transport in Stockholm such as buses, trains, metros and even some ferries, and they have to be bought in advance. Riding public transport without a prepurchased ticket in Stockholm can result in a very hefty fine in case of an inspection. If you intend to spend some time in Stockholm buying a multi ride ticket will almost always be a good idea, as single fares are generally both very expensive in comparison, and less convenient. Tickets suitable for tourists are listed on the SL homepage.

The SL Center store at the central station sells all tickets and supplies timetables and advice, and can be found at the base of the escalators when heading down to the metro.

Single tickets or card topups can be purchased in machines at all metro and train stations, using a MasterCard or Visa card. Ticket machines do not accept cash. Also note that tickets can not be bought on the buses, and must always be prepurchased. 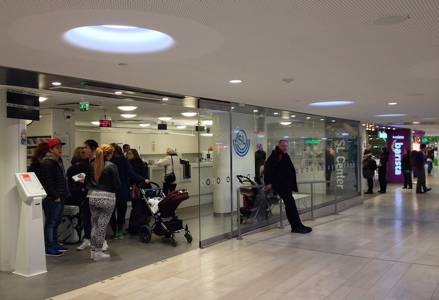 Once you have reached the Slussen station, exit towards Södermalmstorg, go straight ahead (across the square) and past the construction area, until you see the Hilton Stockholm Slussen hotel on left-hand side (down the last side-street).

If arriving with Arlanda Express and heading towards the metro, you will pass grocery stores and a foodcourt in case the in-flight service left you longing for a snack. There are also currency exchanges and lots of ATM's in case you need local currency (Swedish Krona), as well as several stores that can sell you a local SIM card at reasonable prices.

Nearly all shops and restaurants will accept credit cards from Visa and MasterCard, and some will also accept American Express. In general, both chip&pin cards and swipe cards are accepted, but don't be surprised if many retail staff outside the main tourist locations have never seen a non-chip card and may be initially surprised. 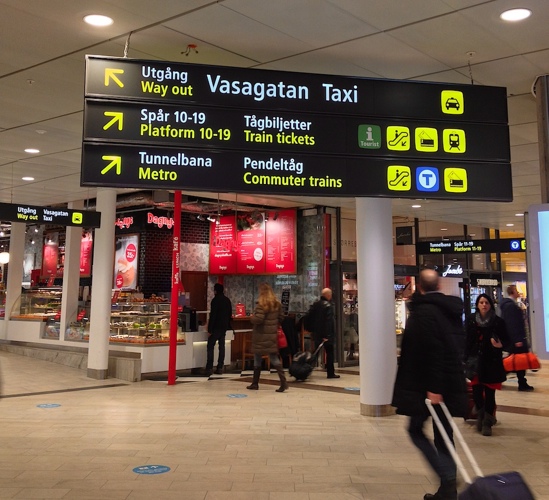 If you have any questions regarding your travel arrangements feel free to contact us, we are more than happy to assist you. Further instructions can also be found on the hotel website.